“The theatre [Montrose-Fox] is decidedly alien to the American scene in its design.” -Exhibitors Herald-World, December 21,1929 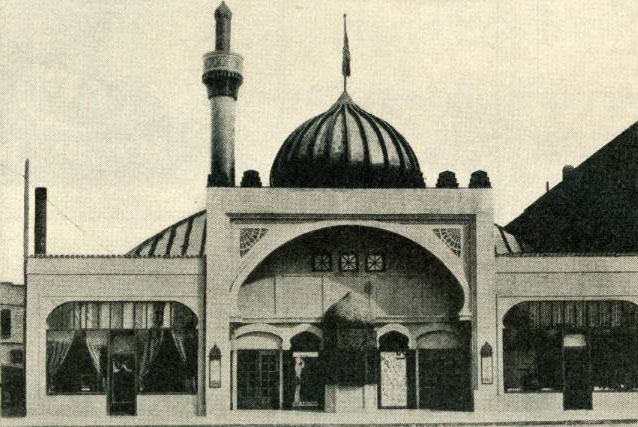 “The Fox theatre in Montrose, Colo., is highly decorative in both design and furnishings, it is comfortably furnished, it has entirely modern equipment, there is a stage, and the seating capacity is 789. Yet Montrose has no more than 4,000 inhabitants, nor is it a suburb of a large city.”

“[The theatre] presents a very pure adaptation of Moslem architectural art, as applied to the mosque. It was designed  by Dick Dickson, Denver. M.S. Fallis, Denver, was the architect.” 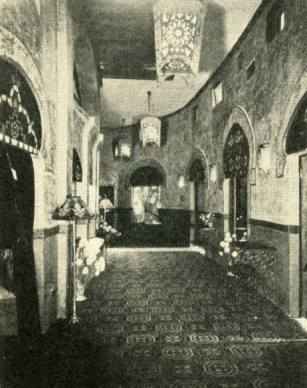 “Passage from the lobby is into a foyer formed by a corridor curving around the rear of the auditorium. The walls are done in rough-finished plaster, with the expanse broken by arched window niches and arched doorways.” 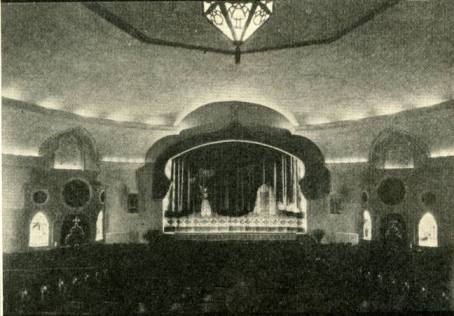 “The auditorium has only one floor and relies principally on its shape and on cove lighting effects for its beauty. This chamber is vaulted, with a polygon painted centrally  on the ceiling, from the center of which is suspended a large chandelier. Two rows of coves, one above the other where the ceiling begins to converge upward toward the middle, run the length of the auditorium from each side of the proscenium arch. The latter is of the Moslem variety employed throughout the house. On each side of it, at the location of the organ lofts, Moslem bays project out, with niches shedding light from concealed sources.”

The theatre is still in operation as the Fox Cinema Center, a two screen multiplex.

Exhibitors Herald-World, December 21, 1929, is part of the Theatre Talks collection.

Cezar Del Valle is the author of the Brooklyn Theatre Index, chosen 2010 Best Book of the Year by the Theatre Historical Society.

​From Victorian opera houses to opulent movie palaces "Distinguished Scholar" "Legendary Theatre Historian" Cezar Del Valle offers a series of entertaining and informative ​talks and walking tours.​ "Thank you for a fabulous 'matinee'. The audience loved hearing about the theatres and were entralled with your slides." -Tracey Simon Program Coordinator Lynbrook Library "The presentation was wonderful. Thanks for coming." -Kelly & Linda Genesee-Orleans Regional Arts Council. "Our open meeting was a full-to-capacity event. Guest speaker Cezar Del Valle, a theatre historian from the New York Council for the Humanities, gave an exquisite presentation." ---The Richmond Hill Historical Society "Versatile and effective in his well-crafted presentations" --Tuesday Evening Hour Cezar Del Valle is the author of the Brooklyn Theatre Index, chosen 2010 Best Book of the year by the Theatre Historical Society. View all posts by Theatre Talks